Practicing - getting the most out of your camera - Bedford Embankment

One of the best ways to learn how to get the best out of your camera is to simply 'practice', get out and about and take lots of photos in different conditions, learning how changing your camera settings changes the resulting images. The wonderful Embankment at Bedford is a perfect place to practice. It provides a wide range of backdrops and differing conditions to challenge both your mastery of your camera's settings and composition and framing. 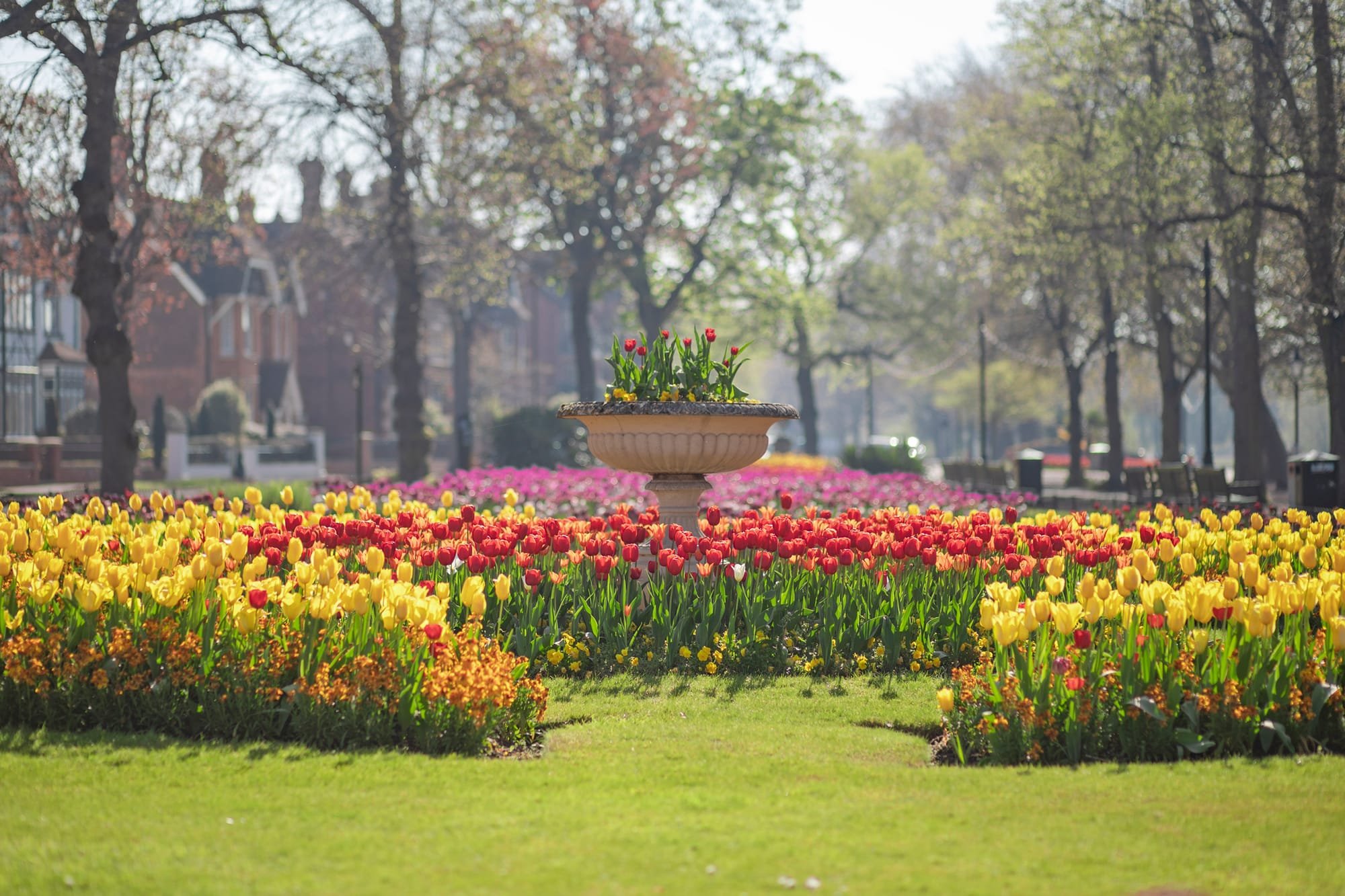 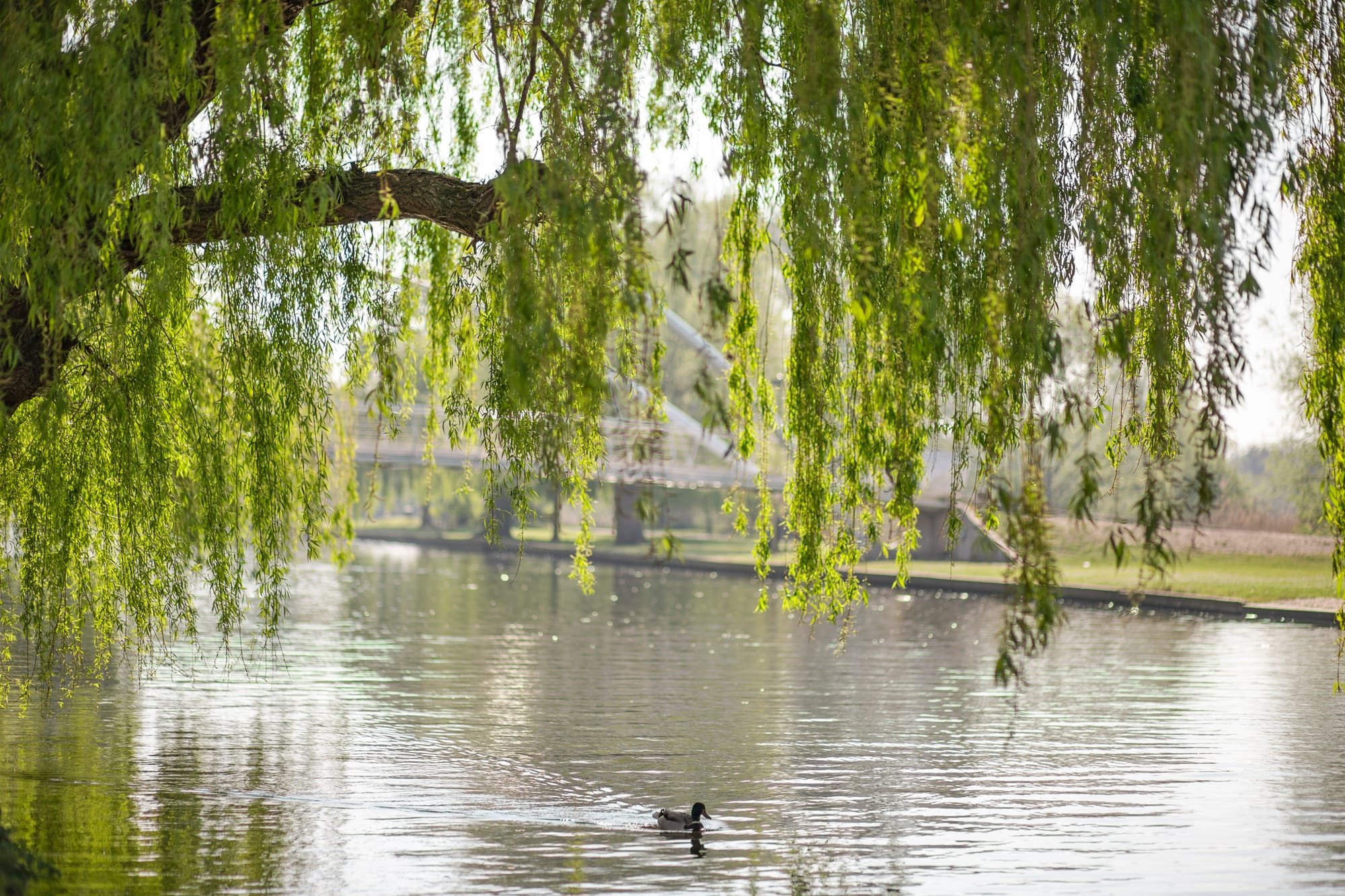 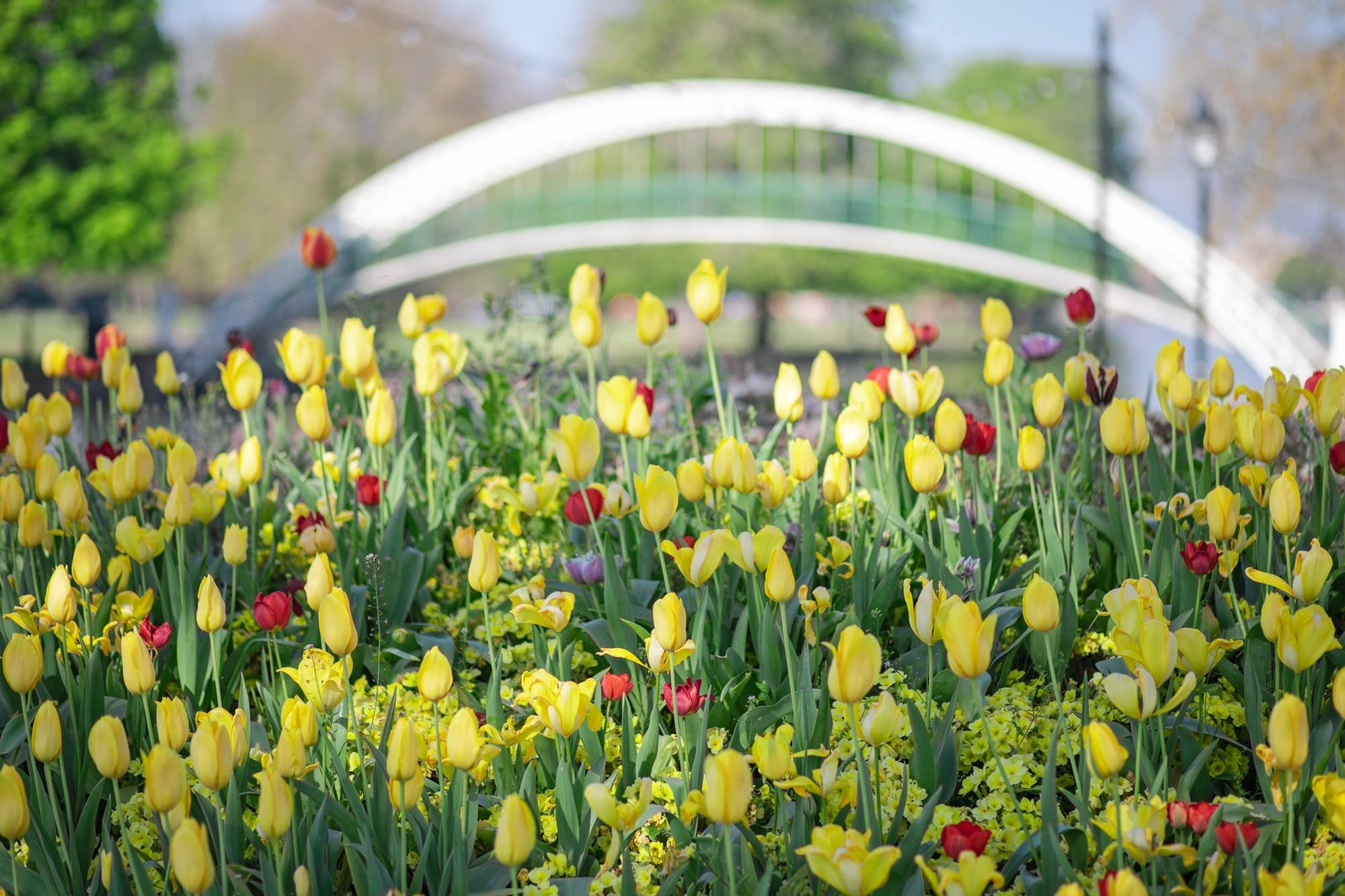 Whether it is the wonderful displays of colour at this time of year, the river, or the wildlife, there is always something of interest to photograph, and changing weather and light mean that there is always a different way to photograph the same thing as well. It's best to set your camera to 'Manual' mode if it has it, usually signified by a 'M' on the mode dial. This enables you to independently set the Aperture, the Shutter Speed, and if needed the 'ISO' (used to be referred to as 'film speed' and also used to use the 'ASA' scale, but is now commonly referred to as 'ISO').

Due to the nature of the physics of light rays, a large opening letting in a lot of light (small aperture value) results in what is known as a 'narrow depth of field' this means that everything in front of, or behind, the point of focus in the scene, is blurred or out of focus. As the opening is closed up and made smaller, letting in less light (a larger aperture value) - the depth of field increases, meaning that more of the scene in front of and behind the point of focus in the scene remains in focus.

This is an important compositional tool. The image of the tulips above with the suspension bridge in the background shows a narrow depth of field as it was taken with a large aperture opening (small aperture value) - the actual value here was f 1.8. The point of focus is within the flower bed meaning the centre of the flower bed is in focus, as you move toward the front or back of the flower bed, the flowers are beginning to get a little blurred, but the bridge which is someway behind the flowers is very blurred. Wide open, or large apertures (small aperture values or f-stops) can be used to blur the background, highlighting attention on the subject or focus point in the image, reducing attention on the background (and potentially the foreground). If instead I had made the bridge the focal point, the bridge would have been in focus, the flower bed would have been very blurred.

This is a great setting for outdoor or natural light portrait shots in particular.

A large or wide aperture (small aperture value) lets in lots of light, in bright sunny conditions, to avoid over-exposing an image, you then need to balance this with the shutter speed.

The larger the 'speed' the longer the shutter remains open and the more light is let through so a speed of 2s lets in more light than a speed of 1/30s.

For wide or large apertures, especially in bright conditions, a very small shutter speed is likely to be required, typically anywhere from 1/200s to 1/5000s depending on how bright the day is and how 'wide' the aperture is.

If your camera is in 'Aperture' mode (usually Av on your mode dial, not A which is Auto) then you can alter the aperture, and the camera will pick a shutter speed it thinks is appropriate.

If your camera is in full manual mode (M) then you can independently set Aperture and shutter speed values, this lets you see the effect of changing values on the image but can also be useful to allow you to set exactly the combination you want for specific conditions. 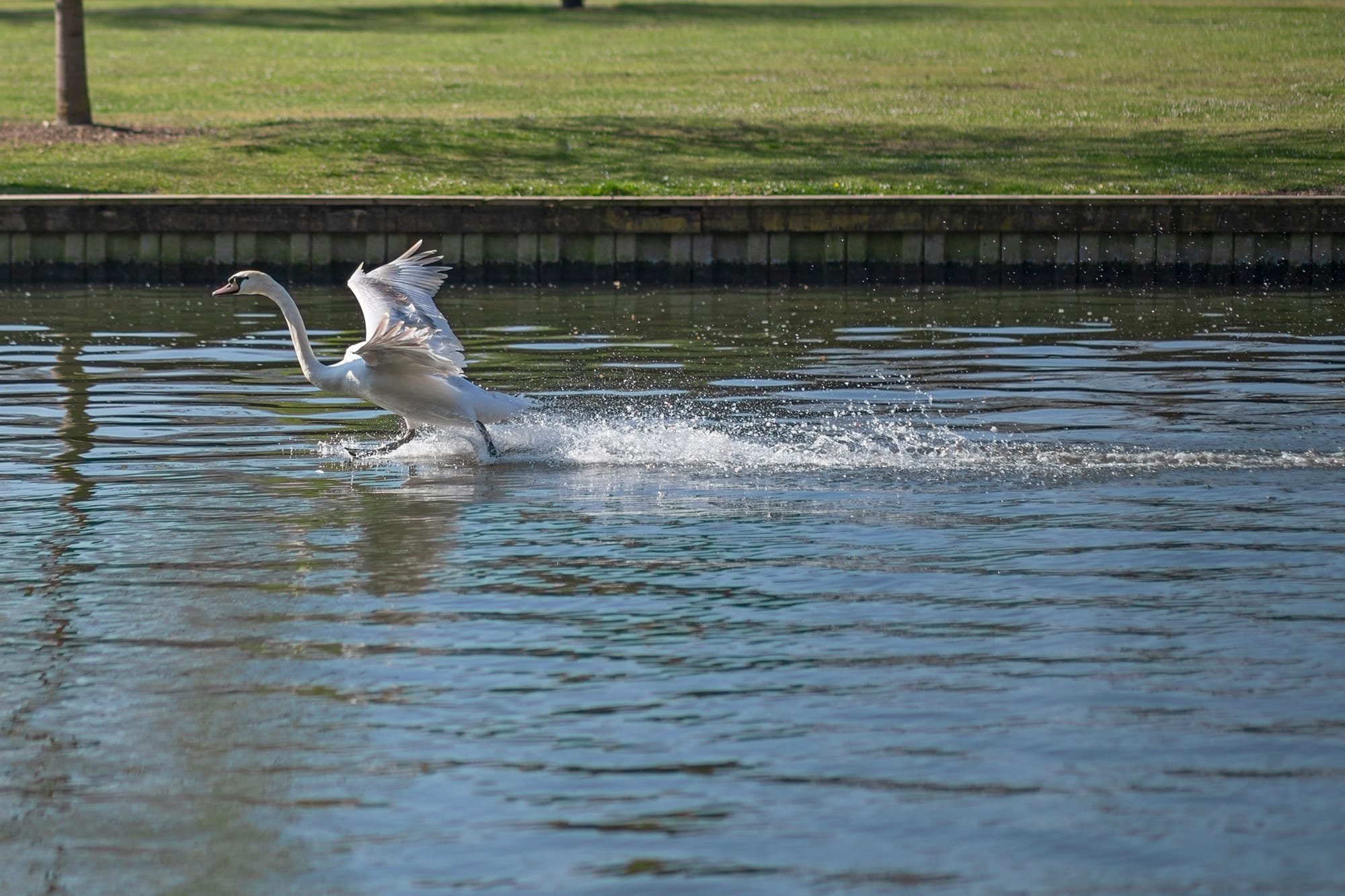 This image uses a small 'fast' shutter speed which effectively 'freezes' or stops the movement of the swan and captures the individual water droplets. Even though it was a bright day, a very small or fast shutter speed, limits the amount of light let in, setting a wider aperture (smaller aperture value) opens up the aperture increasing the amount of light let in to compensate.

an ISO value of 100 is considered 'normal' - increasing the value thus 'boosts' or increases the sensitivity which has the effect of increasing the amount of light. This can be useful if you have to select fixed aperture and shutter speed combinations for compositional reasons, or if the aperture or shutter speed are at the limits of usable values yet you still need more 'light' in the image.

For a bright day outdoors, if you want nice 'blurred' backgrounds, then set the aperture value as low (small) as it can go, the actual value will be limited by the lens you are using, it might be f4.0 or it might be f1.8 for instance. Then set the shutter speed as high as you can go whilst still obtaining a properly exposed image. You can use your camera's inbuilt 'meter' as a guide. When you look through the viewfinder or at the display on the back of your camera, there will be a scale with a bar showing the light reading,  usually you want the bar in the middle of the scale to get a balanced exposure, you will see the bar move when you change the aperture or shutter speed or ISO, it's possible it may be 'locked' at one end of the scale or the other so you may need to move the setting a fair way before you see the bar move. If you are using a tripod, then you can use low/slow shutter speeds, if you are shooting handheld then the slowest you want to use is around 1/50s, this reduces camera shake which can introduce unwanted blur/out of focus issues. A slower setting handheld makes it more likely there will be blur/camera shake, a faster setting makes it less likely. 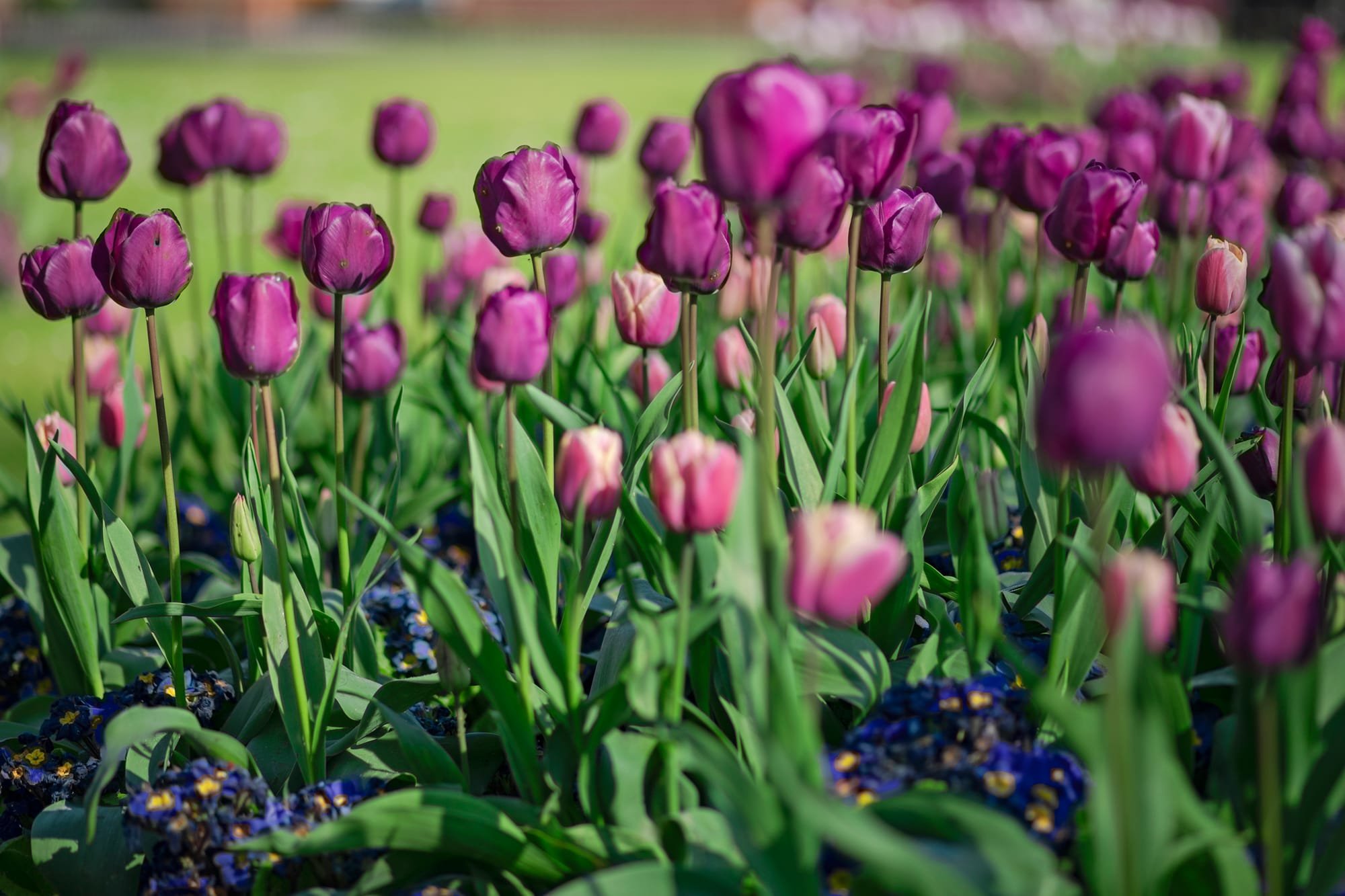 The best tip I can give is to have fun, experiment with different settings, try different things out, but change one setting at a time, to see the changes it makes so you can understand what that setting does. Then you can try changing a different setting and seeing how that changes things. For this image of the tulips above, I wanted a narrow field of focus, so a small 'depth of field' which means a wide, open aperture (small aperture value) - this then needs a fast, small shutter speed to balance the light. It would be easy to make the shadows in this image too dark, losing interest at the base of the stalks, or to make the background too bright, this is where looking at your camera meter reading is useful. Or you can take a shot, then study the image 'histogram' which shows the balance of light in the image, if the 'graph' is bunched up to the left hand side, the image is too dark and you need to change something to increase the light let through, if it is bunched up to the right hand side it is too bright and you need to change something to reduce the light let through.

The more you shoot, the more you will come to understand your camera settings and how changing one setting changes the resulting image. The Embankment offers a continually changing backdrop with numerous things to photograph, both close up or wide angle, objects of interest or general landscapes, we are lucky to have such a feature on our doorstep.